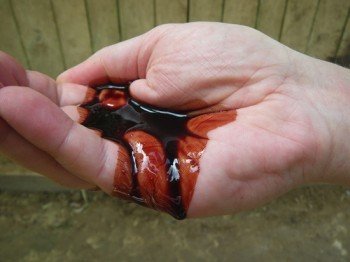 Now used as one of the ingredients in our Finnessiam's SMART Oil and CLEVER Cream!

Possibly the most potent antioxidant on the planet with amazing anti-inflammatory properties. Compared to some others; i.e. Turmeric (everyone's favourite) has an ORAC (oxygen radical absorption capacity) value of 127,608 Clove bud 290,283 and Croton/Dragon's Blood is way up there at 2,897,110!

Any of my Finnessiam Health clients know I rave about this stuff and have seen a huge clearing of William's yeast issues since adding it into his protocol, then coupled with the CBD Oil, he's almost back to "normal"! I now take it myself in my honey/lemon mix in the am and my own pain has been dissipating significantly. UPDATE: Due to us not being allowed to import CBD, our formulation of our Dragon's Blood into our new SMART oil, has been the saving grace for our poor William.

Dragon’s Blood is an important ethno-botanical medicine that is common in South America and Latin America. The name of this popular remedy is, of course, somewhat of a misnomer. While Dragon’s Blood is indeed viscous and blood-red, it is the pure exuded sap of a tropical tree.

Known in Spanish as “Sangre de Drago,” the name may be literally translated as “blood of the dragon tree” as well as the more familiar “dragon’s blood.” Medicinal red latex is derived from a number of new world trees in the genus Croton, widely distributed in South America and reported as far north as Mexico. The most well known source of Dragon’s Blood is Croton lechleri, ranging primarily from the rain forests and low mountains of Columbia and Ecuador to Bolivia.

C. lechleri resin and bark are used in traditional medicine in South America. Externally, it is employed as an antiseptic, as a wound-healing agent, and for skin disorders. Internally, it is used for hemorrhaging, mouth and throat ulcers/infections, and intestinal disorders. This important “rain-forest resource” has several uses that have been validated by several studies.

Dragon’s blood contains a broad range of naturally-occurring compounds, many of which have been well studied. The sap is rich in protective antioxidant phenols, and anti-inflammatory compounds of various kinds. Due to these compounds, Dragon’s blood sap helps to protect the cells of the skin, and reduces redness and swelling. It also contains a group of compounds called proanthocyanidins, which actually repair collagen, the lattice-like main protein that makes up much of our tissues. Additionally, Dragon’s blood contains taspine, a known tissue-healing agent. The sap also demonstrates antibacterial, antiviral and antifungal activity. This is why Dragon’s blood is so widely used on infectious skin conditions of all kinds with great success.

Scientists have found that as a little as a single drop of Sangre de Drago can diminish pain resulting from insect bites and stings, lacerations, burns, and plant reactions for up to six hours. The investigators noted that the sap acts as an analgesic agent by stopping the activation and stimulation of sensory nerve fibers that send pain signals to the brain. These scientists pointed out that it also inhibits the inflammatory response of tissue to chemicals released by these same nerves, and that it does so when applied either externally on the skin or when mixed with water and swallowed to treat gastrointestinal problems.

Traditional Preparation: For external use, the resin/sap is rubbed directly on the affected area several times daily and allowed to dry. Please note: the resin is red! It will temporarily stain the skin a reddish-brown (which will wash off), but it will permanently stain clothing. Rubbing the resin in the palm of the hand first or directly where applied will thicken the resin into a thin, lighter colored paste, which helps form a second skin on top of a wound or rash and reduces staining. For internal use, the traditional remedy is 10-15 drops in a small amount of liquid, taken 1-3 times daily (be prepared, however; it tastes quite dreadful).

Save this product for later
Display prices in: CAD